Revolution Racing Driver Wins His Fourth Race in 19 Career Starts CHARLOTTE, N.C. (July 24, 2011) – Darrell Wallace Jr. got back to his winnings ways in the Jegs 150 NASCAR K&N Pro Series East race at Columbus (Ohio) Motor Speedway. En route to winning his fourth race in 19 NASCAR K&N Pro Series East races over two seasons, and his second of 2011, Wallace and his U.S. Army Toyota Camry ran a nearly flawless race. He qualified second behind series point leader Max Gresham, but made a pass for the lead on lap 36 and never was seriously challenged again. Wallace’s first win of the season came at Richmond (Va.) International Speedway in April. The win marked Revolution Racing’s fourth win in nine starts in 2011, with teammate Sergio Pena, driving the Freightliner Toyota Camry, to two NASCAR K&N Pro Series wins this season. With the win, Wallace again became a serious contender in the NASCAR K&N Pro Series East race, now trailing Gresham by 100 points with three races remaining and Brett Moffitt by 20 points. After solid races by all four Revolution Racing teams, Michael Cherry in the Fueling Your Dreams Tour Toyota Camry finished 11th, Ryan Gifford in the TRD Toyota Camry finished 14th and Pena finished 15th, one lap down. Late in the running, with Gifford and Pena running nose to tail in fifth and sixth, Pena tagged the TRD Camry and sent Gifford spinning, which cost him valuable track position. Later in the running, Pena was running in the top five when the he was turned by the 16 car of Daniel Suarez causing Pena to spin into the infield and lose one lap. All four Revolution Racing Camry’s finished in the top 15 and brought their cars home without heavy damage despite the rough short-track nature of Columbus. On the same night, the Revolution Racing Whelen All-American Series late model program was competing with three NASCAR Drive for Diversity participants at Hickory (N.C.) Motor Speedway. Mackena Bell had the best night of the three drivers in the 60-lap race, despite finishing 14th of 18 cars. Running well within the top 10, her Toyota Camry was forced to stop on the track when a late race spin in front of her blocked the track. She lost valuable track position, and despite running a very clean and consistent race she finished well back in the order. However, her performance showed that she has improved greatly in the Whelen All-American Series. Tayla Orleans and Trey Gibson finished ninth and 10th in their Toyota Camry’s respectively at Hickory, and both ran good races. The Revolution Racing Whelen All-American Series late model program will compete in more than 140 races with six drivers as part of NASCAR’s Drive for Diversity Program. Four NASCAR K&N Pro Series East, six NASCAR Whelen All-American Series and multiple youth racing teams are supported by NASCAR, the U.S. Army, Toyota Motor Sales, Toyota Racing Development (TRD), Goodyear, Freightliner Trucks, Wix Filters, Castle Products, Logitech, Play Seat, iRacing and others. The Jegs 150 can be seen Thursday night at 6 p.m. (ET) on SPEED. 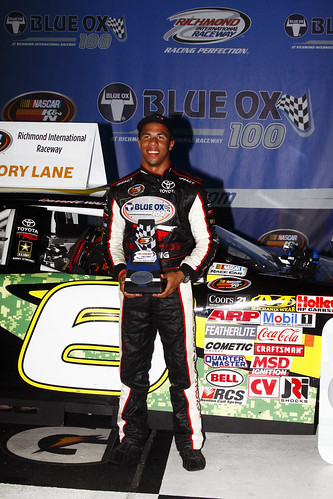 After a tight battle at the front, Darrell Wallace Jr. wrestled the lead away from Max Gresham for the final time on Lap 79 and held on to win the inaugural Blue Ox 100 NASCAR K&N Pro Series East race at Richmond International Raceway. Wallace, from Mobile, Ala., gained the third victory in just his 13th career start in the K&N Pro Series East. He took the lead from Gresham for the first time on Lap 55, and the two later swapped it following a restart on Lap 78, and for the decisive time on Lap 79. “We just had to be patient, and be there at about halfway,” Wallace said. “[Max] Gresham was pretty strong, and I think we just a little bit better car and a better line, and we just took it away from him.” Wallace pilots the No. 6 U.S. Army Toyota for Revolution Racing and Drive for Diversity. He gained two wins as a rookie in 2010, and has finished in the top 10 in all but three of his career starts. Brett Moffitt wound up second with Corey LaJoie, Gresham and Alex Bowman in the top five. For LaJoie, it was his fifth career top-10 finish, all of which have come at tracks in which NASCAR’s national series compete. “[Kevin] Harvick came up and talked to me before the race and gave me tips on the line,” LaJoie said. “I can’t tell my speed secrets, but another caution and we might have had it. He gave me some really useful tips that I didn’t even pick up on in practice. I didn’t realize what to do, so I really appreciate that.” For Bowman, it was his third top-10 finish in as many starts to begin his K&N Pro Series career. 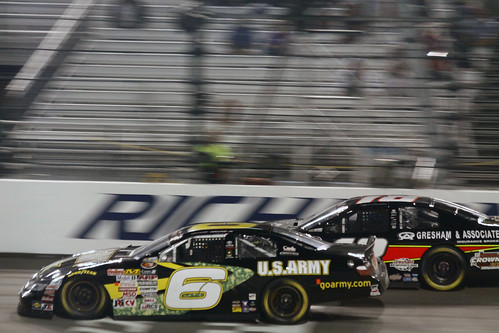 The rest of the top 10 was Jason Bowles, Michael Cherry, Ryan Blaney, Sergio Peña and Matt DiBenedetto. The Blue Ox 100 marked the K&N Pro Series East debuts for Blaney, the son of NASCAR Sprint Cup Series driver Dave Blaney, and action sports superstar Travis Pastrana. Pastrana finished 33rd in the event. With the win, Wallace now leads the season standings after three races by 26 points on teammate Peña. Wallace ended up leading a race-high 55 laps with Gresham the other 45. The race was slowed by just two cautions. There was a 1:48 red flag delay for rain. It can be seen on SPEED on Thursday, May 19. The K&N Pro Series East will next be in action when it is joined by the K&N Pro Series West in the annual East-West Challenge presented by Tompkins Industries at Iowa Speedway on May 21. 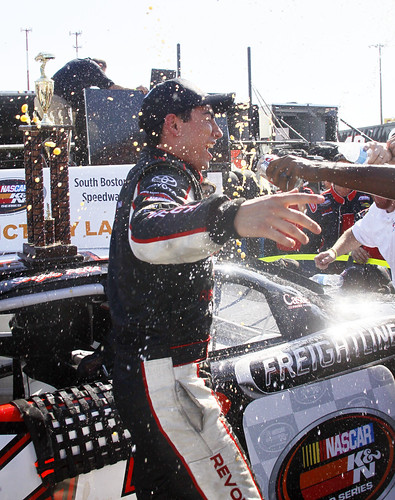 Win Marks Third D4D Victory in Last 12 Series Races   SOUTH BOSTON, Va. (April 17, 2011) – Just more than a year after exploding onto the NASCAR scene with a second-place finish in his NASCAR K&N Series debut in the NASCAR Toyota All-Star Showdown at Irwindale, Sergio Peña grabbed his first series victory in the South Boston 150. Peña, driving the Freightliner Toyota as part of the NASCAR Drive for Diversity program, won the second race of the NASCAR K&N Pro Series East season. It marked the third victory in 12 NASCAR K&N Series races for Revolution Racing over the last two seasons.   Teammates Ryan Gifford, driving the TRD Toyota Camry, and Darrell Wallace Jr., driving the U.S. Army entry, took home fifth- and sixth-place finishes respectively, giving Revolution Racing three of the top-six positions in the tightly contested race. Michael Cherry, driving the Revolution Racing Fueling Your Dreams Toyota Camry, was involved in several accidents including one with then-race-leader Brett Moffitt with nine laps remaining, giving Peña the lead on the race’s final restart with four laps remaining. Cherry spun alone in turn four and Moffitt could not stop collecting Cherry’s Toyota. Peña held off Matt DiBenedetto, Max Gresham and Coleman Pressley for the win. Peña took over the lead in the NASCAR K&N Pro Series East points standing by one point over Coleman Pressley. Wallace is fourth (21 points behind Peña), Gifford is seventh (minus 52) and Cherry is 17th (125 points down).   Wallace Jr, last year’s NASCAR K&N Pro Series rookie of the year, puwon the pole with Peña qualifying third, Cherry sixth and Gifford 12th. “This is a great feeling,” Peña said. “I don’t know what happened to Brett Moffitt there, but unfortunately for him he wasn’t able to finish the race, but he was definitely the car to beat. Luckily I was there to pounce on it and take away the win.”   The South Boston 150 can be seen on Speed TV Thursday at 6 p.m. (ET).