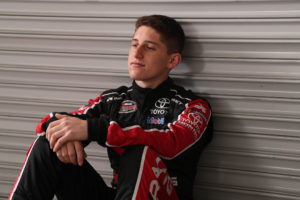 Nicholas Sanchez, 17, will make his NASCAR K&N Pro Series East debut Saturday at South Boston Speedway, competing in the Twin 100s for Rev Racing. A native of Miami, Florida, Sanchez is a third-year member of the NASCAR Drive for Diversity Driver Development Class. Sanchez is currently in his second year, running full-time in the NASCAR Whelen All-American Series.

Sanchez was also part of Rev Racing’s Youth Development Program in 2017 and 2018, driving a Legend car in the Bojangles’ Summer Shootout at Charlotte Motor Speedway. In his 2018 Legend car season with Rev Racing, Sanchez earned five podium finishes, six top-5s and one win in the Pro Series Class.

“I am extremely excited to make my first K&N East Series start at the upcoming South Boston Twin 100s,” said Nicholas Sanchez. “I have had a good season so far in my Late Model and I feel really prepared to take on this next opportunity in the East Series with the Rev Racing.”

He will join teammates Chase Cabre and Ruben Garcia Jr., piloting the No. 2 Max Siegel Inc. Toyota. All Rev Racing drivers will return to action this Saturday at South Boston Speedway on May 4th for the WhosYourDriver.org Twin 100s at 7:00 pm.