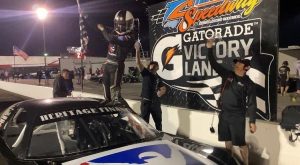 After finishing eighth in the first 40-lap feature, Caruth wheeled his No. 6 Sunoco/iRacing Chevrolet to Victory Lane in the second feature race. His teammate, Isabella Robusto, finished seventh in the first feature, but was knocked out of the second 40-lapper after an early-race collision.

Caruth has elevated his stats in every category since his first Late Model win one year ago, collecting six Top 10s, three Top 5s, and two wins on the year in addition to Saturday’s performance. Caruth hopes to carry this momentum into Nashville, where he will pilot the No. 6 NTI/UTI Chevrolet in the ARCA Menards Series East.

“As a team, our Twin 40s were pretty solid,” says Caruth. “Despite having to fight for position, we were able to go from 13th to 8th in the first Twin. Then, we got the pole in the second Twin, and used that to propel ourselves to a win.”

Caruth will compete at Nashville Fairgrounds Speedway, under Rev Racing and owner Max Siegel, in the Crosley Record Pressing 200 presented by Action 24/7 on the .596-mile paved oval at 8:30 p.m. CT / 9:30 p.m. ET. Teammates Lavar Scott and Regina Sirvent will also compete this weekend at Hickory Motor Speedway in the Late Models on Saturday, May 8th.

Headquartered in Concord, N.C., Rev Racing, owned by Max Siegel, operates the NASCAR Drive for Diversity
Program, which is the industry’s leading developmental program for ethnic minorities and women drivers and pit crewmembers. For more information about Rev Racing visit http://revracing.net or follow on Twitter
@RevRacin.